Oral and paper tribunal appeals, and the online future 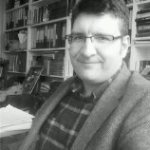 There has been some discussion recently here and here about oral and paper appeals and the possible impact of online dispute resolution. In light of that, this contribution offers some data and thoughts on the issue.

The next point is the differential outcomes between oral and paper appeals (Figure 1). 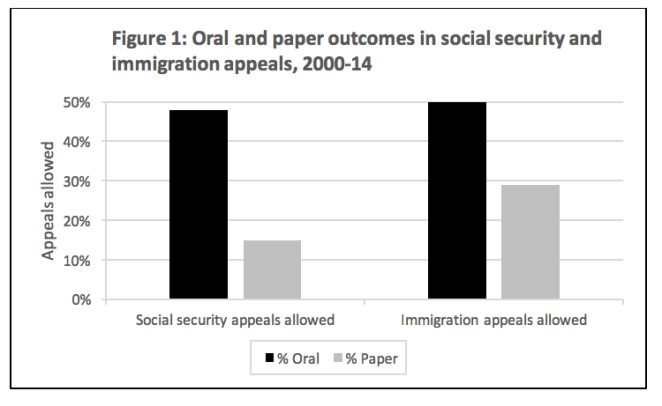 The data show that some 48 percent of social security appeals were allowed, whereas the proportion of allowed paper appeals was 15 percent. As regards immigration appeals, some 50 percent of oral appeals were allowed compared with 29 percent of paper appeals. Looking at these data, it is apparent that appellants who opt for oral appeals experience higher success rates than those appellants whose appeals are determined on the papers.

For people thinking of appealing to a tribunal, the message is clear: go for an oral hearing. A hearing without representation is more likely, all things considered, to provide a better outcome than a paper appeal.

Why the difference between oral and paper appeal outcomes?

The successive (and now discontinued) reports of the President of social security appeal tribunals concluded that decisions were most commonly overturned because the tribunal hearing generated additional evidence, usually in the form of oral evidence provided by the appellant. A similar issue arose in the context of immigration appeals by family visitors – see research into family visitor appeals by Thomas, [2004] Public Law 612, 631. These appeals usually involved not the appellant but their UK-based sponsor attending the hearing to give evidence that the appellant would only visit the UK and not stay permanently. The credibility of the sponsor was usually a decisive issue in these appeals.

A related point is that oral hearings are often seen as being especially important when it comes to assessing the appellant’s credibility. The Tribunal sees the appellant in person and may be better placed to take a view on credibility issues. In its 2003 report on social security appeals, the National Audit Office stated that ‘especially for medically assessed benefits, it is likely that the presence of the customer provides crucial evidence. … Customers we interviewed felt that oral evidence was more effective than paper-based evidence when appealing to a tribunal.’

Another factor is the amount of time given to tribunals to decide paper and oral appeals. Tribunals are often given a shorter list of oral appeals compared with a heavy list of paper appeals. Doing an ‘appeal on the papers’ can become synonymous with disposing of a case quickly. There may also be an implicit or subconscious assumption that if an appellant does not opt for a hearing, then this may well be because he or she is not pursuing the case as vigorously as possible. And the implicit assumption may be that this is because the appellant does not therefore have a strong case. In 2001, the then Immigration Appeal Tribunal (now Upper Tribunal (Immigration and Asylum Chamber) commented on the use of standard templates by adjudicators/Immigration Judges:

‘The Tribunal is receiving a number of appeals from adjudicators in family visitor cases where it does not appear that the adjudicator has given any or sufficient consideration to the grounds of appeal or the documents submitted. There is nothing wrong with an adjudicator using a template as a guide to ensure that all essential features are covered. However, the template is not sufficient on its own. Proper consideration needs to be given to the evidence. If adjudicators simply confirm the decisions of Entry Clearance Officers it will give the impression of a lack of judicial independence. It is not for the Tribunal to do the adjudicator’s job. If an adjudicator fails to make a proper assessment of the evidence and the Tribunal does so, effectively acting as a first instance appeal, the appellant is deprived of one tier of the appellate process.’ (Oyeleye v Entry Clearance Officer, Lagos (01TH02325), para.6 (emphasis added)

Template paper appeals that do not receive proper consideration and rubber-stamp initial refusal decisions undermine the perception of tribunals operating as effective judicial and independent bodies. In other words, issues of tribunal procedure (e.g. oral/paper hearings) are not mere issues of procedure – they also concern wider and more fundamental issues such as the perception – and reality – of tribunals acting as independent judicial bodies.

It would also be interesting to see the breakdown in the outcome of appeals by individual tribunal judges/panels. Do some judges allow or dismiss more (oral/paper) appeals than others?

It is important to highlight two points here. First, the above data are not necessarily conclusive. It has not been conclusively demonstrated that the tribunal procedure itself necessarily leads to better outcomes. Nor is it possible to know the degree to which procedure affects outcome. It is also likely that there will be other variables at play here. It could be that appellants with a good chance of success are more likely to attend their appeal hearing. It would be interesting to undertake a much more detailed statistical analysis here. This could, for instance, tell us how much more likely it is that an appeal will be allowed if there is an oral hearing. It would also be interesting to see the breakdown in the outcome of appeals by individual tribunal judges/panels. Do some judges allow or dismiss more (oral/paper) appeals than others? More detailed data would be required for this.

The second point is that paper appeals do have their benefits. They are quicker and cheaper. Some appellants might think that an oral hearing would be both intimidating and stressful. Some people may not know the difference between going to a tribunal and being put on trial before a court. Giving people the choice allows them to select their preferred option. On the other hand, there are some downsides to oral hearings, as noted above. Oral hearings generally tend to take longer and they take up more judicial time and resources. Various other parts of the administrative justice system proceed without oral hearings – for instance, ombuds investigations, internal administrative review decisions, and the paper stage of seeking permission for judicial review. However, it is important that people make well-informed decisions about the type of appeal procedure.

It is at this stage that the Ministry of Justice’s tribunal reform programme comes in – in particular the move to Online Dispute Resolution (ODR). This will move more appeals online and reduce the number of oral hearings. Physical oral hearings will only be used when necessary. More cases will be heard through online processes. This project is being developed. It is not yet known how exactly it will work in practice, what degree of choice appellants will have, or how claimants will be signposted through the process.

One test of ODR will be on outcomes and how the outcomes of ODR appeals compare with traditional oral appeals.

ODR has prompted some debate. It might be assumed that an online appeal will become a de facto paper appeal – and therefore online appeals will have similar outcomes and similarly lower success rates for appellants. On this basis, it could be argued that online appeals represent a weakening of appeal rights.

This may not necessarily be the case. Online processes will not necessarily replicate offline processes; in other words, they do not necessarily resemble the current approach to paper appeals used in social security and immigration cases (and, since August 2016, in some special educational needs appeals). Online processes could enable tribunals to interact with appellants, to ask questions and to elicit additional information. In many cases, it may be possible to use online processes in order to undertake the inquisitorial approach currently deployed solely through the confines of an oral hearing. The Traffic Penalty Tribunal has developed an online inquisitorial approach in which the tribunal communicates online, asks questions, collects evidence and interacts with the parties. It is possible that a similar model of an online inquisitorial approach could maintain the standards of justice and make the process more efficient and quicker.

At the same time, there are concerns around the use of online processes in more important and/or complex cases (e.g. social security appeals) that involve credibility issues or the collection and assessment of medical evidence. This issue was discussed by Michael Adler at the UKAJI workshop (26 January) on researching users’ perspectives on administrative justice. He noted that digitisation of appeals could lead to more people making appeals if the process is less daunting than going to a hearing. In that sense, digitisation might facilitate access, particularly for disabled appellants. He also noted, however, that there is no explicit commitment to evaluating the changes as they’re rolled out.

Looking forward, one test of ODR will be on outcomes and how the outcomes of ODR appeals compare with traditional oral appeals.

Robert Thomas is Professor of Public Law, University of Manchester.

2 thoughts on “Oral and paper tribunal appeals, and the online future”