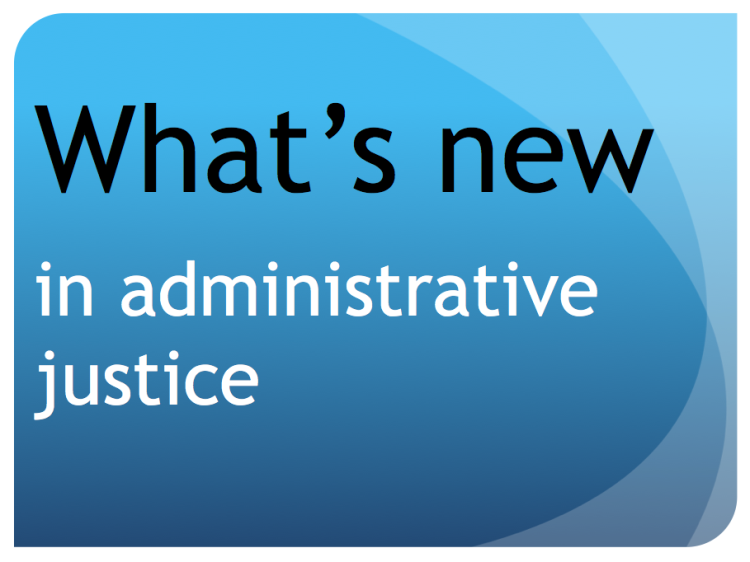 The Immigration Bill has completed its passage through the House of Commons and had first reading in the House of Lords. Second reading is scheduled for 22 December.

SNP MP Neil Gray initiated a Westminster Hall debate on benefit sanctions. Mr Gray expressed concern that sanctions are being imposed too hastily and with increasing frequency. Responding for the Government, Work and Pensions Minister Priti Patel emphasised the importance of conditionality in the benefits system and suggested that the existing process for the imposition of sanctions operates effectively.

The House of Lords EU Justice Sub-Committee has been hearing evidence in relation to an inquiry on the impact of repeal of the Human Rights Act 1998 on EU law.

The Work and Pensions Committee has held two evidence sessions in relation to its Local welfare safety net inquiry. The Committee is considering discretionary welfare, housing and Council Tax assurance schemes, including issues of sufficiency; accessibility; allocation criteria and appeals; and how local policies are drawn up and monitored.

The Justice Committee has launched an inquiry into the current and future role of the magistracy. The deadline for written submissions is 31 January 2016.

The House of Lords Equality Act 2010 and Disabilities Committee has heard evidence from experts, including the Managing Director of the PHSO, advising against setting up a new Disability Ombudsman. Instead, it was suggested that the existing ombudsman can and should deal with discrimination complaints.

The Women and Equalities Committee has held a one off session with the Equalities and Human Rights Commission on its funding and strategic plan.

MPs have set up an all-party parliamentary group to promote the use of ADR as a way of resolving disputes.

The Chancellor George Osborne announced in the autumn statement that the planned changes to the tax credit system are to be abandoned. The proposals had caused considerable controversy and the House of Lords recently voted to delay their implementation.

Justice Secretary Michael Gove has indicated that plans to replace the Human Rights Act with a British Bill of Rights have been further delayed, and a consultation is now expected in the new year. Mr Gove also indicated that the Government were considering whether the Supreme Court could act as a “constitutional longstop” in cases of disagreement between the Strasbourg Court and Parliament.

The High Court in Belfast has ruled that abortion legislation in Northern Ireland is in breach of the European Convention on Human Rights. Abortion is currently only permitted where a woman’s life is at risk, or there is a risk of permanent harm to physical or mental health.

A decision by the Home Secretary to refuse British citizenship to the wife and children of a supporter of Osama bin Laden in order to deter other potential extremists has been ruled unlawful by the High Court. The court concluded that Parliament had not conferred the discretionary power to refuse naturalisation on to the Home Secretary for the pursuit of broad and general public policy objectives.

The House of Lords Library has published a briefing paper on the Future of Legal Aid. The Briefing Paper, prepared in advance of a House of Lords debate on the subject on 10 December, outlines the changes to legal aid introduced via the Legal Aid, Sentencing and Punishment of Offenders Act 2012 and notes that post legislative scrutiny has highlighted a negative impact on access to justice and unintended cost increases. It also summarises further proposals for reform including changes to criminal legal aid contracts and a further reduction in fees.

The Care Quality Commission has published the Mental Health Act Annual Report 2014/15. The Report found unacceptable variation in the way providers are applying the Code of Practice, and that providers were failing to ensure that patients were given the support they need in order to be involved in their care. This included the information they were given, access to external support such as advocacy, and care planning.

The PHSO has launched a public consultation on a draft service charter. The deadline for submissions is 13 January 2016. The 2014-2015 Annual Report is also now available.

The latest civil justice statistics, including judicial review, have been published by the Ministry of Justice.

Bangor University has published a new research Report Understanding Administrative Justice in Wales. The research included a stakeholder analysis, literature review and a series of workshops and conferences for the policy, practice and research communities.

« Conference and call for papers
More merger than radical reform: The Government’s response to its Consultation on a new Public Services Ombudsman »