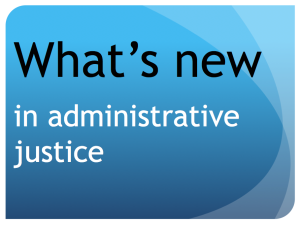 The Public Accounts Committee has published a report on the Ministry of Justice’s reforms to the probation system, aimed at reducing reoffending. The report expressed concerns about a lack of progress with the reforms.

The new Secretary of State for Justice Liz Truss has given evidence to the Justice Committee. She confirmed that the Government still intend to replace the Human Rights Act with a British Bill of Rights. Court and prison reform were also identified as priorities, although she did not commit to introducing new legislation on the latter, as anticipated.

The Government has responded to the Justice Committee’s Prison Safety report, making a commitment to publish a comprehensive prison safety and reform plan in the autumn.

The report was also the subject of a Westminster Hall debate.

The Scottish Government has announced plans introduce new laws to help prosecute controlling and coercive behaviour. Michael Matheson, Cabinet Secretary for Justice, said that the measures were needed because existing laws focused on individual incidents of physical abuse and violence and do not reflect the damage of sustained controlling behaviour.

The Joint Committee on Human Rights has announced a new inquiry into the human rights implications of Brexit. The issues of particular interest to committee include the potential impact of Article 8 on EU nationals living in the UK and UK nationals living in other EU Member States; the current and future use of human rights requirements in trade deals; and the impact on rights protected by EU law.

The House of Lords Constitution Committee has announced a new inquiry into the legislative process and is asking for evidence to inform its work. The inquiry will look at how legislation is prepared by Government and scrutinised by Parliament. It will consider how outside organisations and the public are involved in the process and how their role can be developed, including the possible uses of new technology.

A report coordinated by the British Institute of Human Rights for the UN Periodic Review has suggested that the UK has failed to meet many previous human rights recommendations made by the UN and should do more to prevent prison overcrowding, tackle hate crimes and restrict powers to stop and question travellers under the Terrorism Act 2000.

The Equality and Human Rights Commission has published the Scotland Annual Report 2015/16. Highlights of the year included publication of the five-yearly report ‘Is Scotland Fairer?’ and the launch of a major campaign to end pregnancy and maternity discrimination.

The Grand Chamber of the ECtHR has ruled that the Article 6 rights of one of the men convicted in relation to the attempted bombings in London on 21 July 2005 had been violated. However, the violation, which arose from the failure by the police to provide the applicant with timely access to a lawyer, did not mean that he had been wrongly convicted.

The Scottish National Party has announced a delay in the introduction of its Named Person Scheme, following a Supreme Court ruling that the data sharing aspects of the proposals were incompatible with Article 8. The delay will allow for further consultation on how to make the scheme complaint with the European Convention.

The Attorney General’s Office has published a Review of the Iraq Historic Allegations Team, undertaken by Sir David Calvert-Smith. The Review concluded that the IHAT will be able to complete its work by the end of 2019 in accordance with expectations, provided certain recommendations for improvements to the process are implemented.

Theresa May spoke at the Leaders’ Summit on Refugees in New York on 20 September, where she announced an increase in funding for humanitarian support.

The Ministry of Justice has published a response to its consultation on proposals to reform the fees charged in the Immigration and Asylum Chamber of the First-tier and Upper Tribunal. This confirmed the Government’s intention to significantly increase fees, from £80 to £490 for a decision on the papers, and from £140 to £800 for an oral hearing.

The Home Office has published a response to the APPG report on ‘fleeing persecution: asylum claims in the UK on religious freedom grounds’. The response outlined policy guidance for dealing with such claims and accepted a number of recommendations aimed at ensuring that this guidance is always followed in practice.

HMIC has published a report on the Best Use of Stop and Search scheme. The report follows the suspension of a number of forces from the scheme, which aims to achieve greater transparency and community involvement in the use of stop and search powers, and to support a more intelligence-led approach. The forces were suspended following a finding in 2015 that they were not complying with key features of the scheme. The new findings will inform the Home Secretary’s decision on whether to lift the suspensions.

The Scottish Government has announced that Scotland’s National Performing Companies, including the Scottish Ballet, the Scottish Opera and the National Theatre of Scotland, have pledged to ensure that 50% of their board members are women by 2020.

The Welsh Government has published the legacy report of the Committee for Administrative Justice and Tribunals Wales (CAJTW), whose life came to an end in March 2016 after two years of work. The report was informed by the Committee’s own work and by a research project commissioned by the Committee and conducted by Bangor Law School. A summary of the legacy report appears on UKAJI’s website at: https://ukaji.org/2016/09/21/administrative-justice-in-wales-legacy-report-and-the-way-forward/

The Northern Ireland Executive has published Advice for decision making: decision making and appeals. This is guidance on principles of decision-making, outcomes and appeals for those making social security benefits decisions. It is part of the Department for Communities’ series of reference guides on interpreting social security legislation for decision-makers and for stakeholders in the advice community.

The National Audit Office has published a report on protecting information across government. The report concluded that the Cabinet Office should establish a clear role for itself in providing principles and guidance for Government departments and the wider public sector on how to protect information while redesigning public services using new technology.

The Wales Governance Centre at the University of Cardiff has published a report on Justice in Wales, following the establishment of a working group to consider the practical implications of a distinct body of law in Wales for the shared legal system of England and Wales.

The Research and Information Service of the Northern Ireland Assembly has published a research paper on the use of business cases in the public sector, at the request of the Committee for Finance to inform its consideration of the issue.

The Legal Services Board has published proposals for legislative reform of the regulatory framework for legal services in England and Wales.

The following annual reports have been published:

The Ministry of Justice has also published the latest tribunal statistics for April-June 2016. They show a high success rates of appeals concerning two of the main benefits, Employment & Support Allowance and Personal Independence Payments, and an improvement in timeliness of appeals. A discussion of the latest tribunal statistics appears on UKAJI’s blog at: https://ukaji.org/2016/09/23/tribunal-statistics-april-to-june-2016/

The Ministry of Justice and HMCTS have published a joint statement – Transforming our justice system – announcing a programme of reform to modernise the Courts and Tribunal Service. The proposals including increasing the use of case officers rather than judges for routine tasks; making more decisions on the papers; increasing the use of virtual hearings and online processes; and encouraging the resolution of cases out of court. Views on the proposals are invited by 27 October 2016.

The deadline for responses to the call for evidence for the House of Lords Constitution Committee’s inquiry into the legislative process (see above under Parliament) is 16 October 2016.

The Law Commission is consulting on its 13th programme of law reform. Among the issues it is considering are: Codification of the law in Wales – which areas of Welsh law could be made clearer with codification?; Inquiries – is the present law leading to slow, costly public inquiries?; and Reviewing children’s social care – does the law need to be reviewed?  The deadline for responses is 31 October 2016.

The Welsh Government has published a consultation on the use of agency workers during strike action in Welsh public services. The deadline for responses is 6 December 2016.