International workshop on measuring effective access to justice – an overview

The following overview sets out a summary of a recent workshop on access to justice hosted by the Open Society Justice Initiative (OSJI) and Organisation of Economic Co-Operation and Development (OECD). It was held in Paris, at the OECD Conference Centre, on 3-4 November 2016.

The Open Society Justice Initiative (OSJI) and Organisation of Economic Co-Operation and Development (OECD) jointly hosted the event, to facilitate the exchange of information and experiences on how we define, measure and evaluate access to justice and legal need. Around 50 participants attended from 20 countries, some within Europe but also further afield e.g. the US, South America, Indonesia, South Africa, Australia.

A cross-cutting purpose of the event was to help implement and monitor the UN Sustainable Development Goal 16.3 – to ‘promote the rule of law at the national and international levels, and ensure equal access to justice for all’. Although criminal justice was discussed, the focus was more on civil, administrative, and family justice. Presentations were given to kick off each session, but much of the workshop was dedicated to roundtable discussion.

A link to the presentations and the agenda is here

The different social, physical and economic conditions within countries highlighted how governments must start with an understanding of their population’s legal needs and experiences in accessing justice. There was discussion that justice problems are really everyday issues people have exercising their rights and therefore cross-cut many areas of social policy not just justice departments.

In some places the very stark differences in levels of income, education, gender equality etc underline the need for both an inclusive legal framework and high levels of support so it can be accessed by all groups of the population. Ensuring equity was therefore a key overall theme, underpinned by various issues such as:

Approaches to improve the equity of access to justice

Countries shared a number of approaches, many of which fit into these high level themes:

Some countries are expanding the scope of legal aid to civil and administrative cases (Estonia, France, Ukraine, Georgia, Indonesia) and others are extending this to cases resolved through alternative dispute mechanisms (Armenia, Germany, France, Lithuania, Switzerland).

Techniques to measure legal need and the impact of interventions

Different approaches were discussed, but legal needs surveys were a particular topic of interest. Attendees agreed they are still probably the best way to understand the big picture, in particular experiences outside the formal justice system where most problems are resolved.

National legal needs surveys are now carried out by 37 countries. The UK pioneered the design of some of the first legal needs surveys, and is still seen as a leading authority. Prof Pascoe Pleasence (UCL) gave an overview of their history and use, explaining that while earlier surveys tended to focus on processes used to resolve problems, later ones have reflected greater interest in issues such as problem impact, clustering, legal capability, and drivers of problem experience and problem resolving behaviour. Some high level insights from legal needs surveys have included:

We had several presentations of legal needs surveys in different countries (e.g. Canada, Australia). Attendees agreed that they are effective for highlighting big issues and assessing whether people make use of the interventions available to them (e.g. demonstrating low take-up of formal legal services in New South Wales relative to informal methods).

There was also discussion of the limitations of legal needs surveys, including (but not exclusively):

The business case for continuing legal needs surveys was discussed – it was noted that in some countries it may be difficult to sustain the level of funding needed to keep them in place. Identifying the costs of unmet legal need is challenging, but given current financial pressures in many countries this was seen as an important way to highlight the case for future monitoring and evaluation.

Other techniques to measure legal need and the impacts of interventions

Alternative ideas and examples of existing approaches were discussed, including: 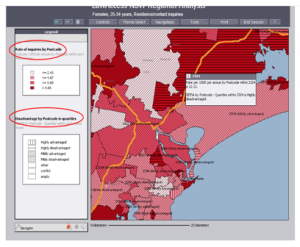 More generally, there was discussion that since justice issues cut across social policy areas, partnership working across sectors, and academic engagement, are crucial to help identify critical points in the wider system where interventions can be targeted. There is also a need to look beyond narrow definitions of effectiveness such as costs and case outcomes, and consider the broader impacts on individuals and those around them.

We saw some examples of tools which use consistent indicators to compare performance between countries. For example:

We also saw some examples of how data on legal needs and problem resolution can be presented in interactive ways, to help decision makers and the public people engage. For example, HiiL showed some visualisations (screen shots from the conference presentations below) being used to collate justice demand indicators, and advice-seeking behaviour.

Next steps and further information

Following the conference, OECD will be coordinating further work on mapping access to justice priorities in different countries and the strategies being used to tackle them.

Collating information on methods and lessons learned on evaluation design and implementation is of particular interest, as is understanding more about the range and quality of people-focussed measurement data and how it is used.

As a longer term ambition, OECD would like to explore the feasibility of standardising a core set of indicators to help implement and monitor SDG 16.3.

Another roundtable meeting will be scheduled in spring next year. In the meantime, a link to all the presentations given and to the full agenda is here

« The draft Public Service Ombudsman Bill: What recommendations are being taken forward?
Social security systems based on dignity and respect – Invitation to tender »