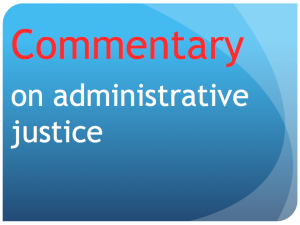 Administrative justice continues to be a Cinderella amongst the justice systems and remains a relatively neglected area.

Yet administrative justice deals with far more ‘cases’ of alleged injustice and directly affects a much larger section of the population in their day-to-day lives than do the civil, family or criminal justice systems. Everyone interacts regularly with, or is affected by, administrative systems and administrative decision-making, often needing to challenge decisions and seek redress. In her 2011 JUSTICE lecture, then Parliamentary and Health Service Ombudsman Ann Abraham notes:

‘Administrative justice can sometimes seem the poor relation by comparison with the civil, criminal and family justice regimes. Yet citizens are just as likely, if not more likely, to come across administrative justice issues in their ordinary lives than civil or even family justice issues. The outcomes of decision making by a wide-range of public bodies on a daily basis affect family incomes, jobs, healthcare, housing, education and much, much more.’

For users and reformers, this area of the justice system presents particular challenges. These include that it is made up of different systems – the public bodies making initial decisions (and rules and guidance governing those decisions); the tribunals/complaints/ ombuds and other mechanisms that operate at local and national level; and the different approaches taken by administrations in devolved jurisdictions.

These factors mean that administrative justice is susceptible to fragmentation and silo isolation, and as such it poses unique challenges for those seeking to learn lessons across the ‘system’.

Decline in support for independent oversight

An independent, robust, overarching body able to draw lessons and help thinking across the system(s) was for long recognised as necessary and valuable. (For an overview of the history, see 10 years on, are we closer to defining ‘administrative justice’? and the PASC inquiry) Yet in recent years various oversight initiatives have stalled or had their funding withdrawn (eg the AJTC, its Scottish and Welsh committees, the AJF).

Despite this self-confidence, as government embarks on an ambitious reform programme, with an investment of nearly £1billion, that aims to transform how people access tribunals and other justice mechanisms, the need for independent oversight is greater than at any time in the past.  That need will be all the more with the proposed convergence of the public-sector ombuds (covering Parliamentary, Health, and Local Government in England), which will have far-reaching consequences for complainants and public service providers and ombuds in devolved jurisdictions, as well as for the  relationship between the ombuds and other institutions for administrative redress, such as courts and tribunals. Moreover, any such body must be capable of providing holistic oversight, and not be linked to any one strand of the administrative justice system.

Keeping an eye on research and working with research oversight bodies

Evidence derived from independent rigorous research should be key when designing redress mechanisms and reforming administrative justice. This demands greater collaboration between independent researchers and government departments/public bodies to identify research needs, improve data recording and facilitate access to data. This is a role that the UK Administrative Justice Institute (UKAJI) has been asked to fill and has progressed over the past three years.

It has become evident during UKAJI’s life is that there is a great deal of research being undertaken relating to ‘administrative justice’, some, but not all, by empirical legal researchers in university law departments. However, as institutional memory fades, past research can be lost. It is also clear that many people are involved in delivering ‘administrative justice’ but do not see themselves as part of an administrative justice system and do not look to that ‘system’ for evidence or useful learning.

Like oversight, research needs must also be considered independently and holistically across the system. There is therefore a need for an administrative justice oversight body to work closely with UKAJI and other research-focused organisations to ensure that thinking, new initiatives and policy change are informed by empirical evidence.

Below are suggestions from UKAJI for what we’d like to see as part of a future administrative justice oversight body, following the abolition of the AJF.

In our view an independent oversight body should:

Activities we consider essential for such an oversight body include:

Finally, it is worth remembering why administrative justice merits oversight and scrutiny. In the words of former Parliamentary and Health Services Ombud Ann Abraham:

‘All this is by way of reminding ourselves why administrative justice matters, why it is not some arcane discipline best left in the shadows, but something that is fundamental to ordinary daily life with much wider implications for the ever contested territory between state and society, the central and the local, the individual citizen and officialdom.’

« Data sources for administrative justice research – a toolkit for researchers
A Design Problem for Judicial Review: What we know and what we need to know about immigration judicial reviews »