By Lee Marsons (University of Essex) 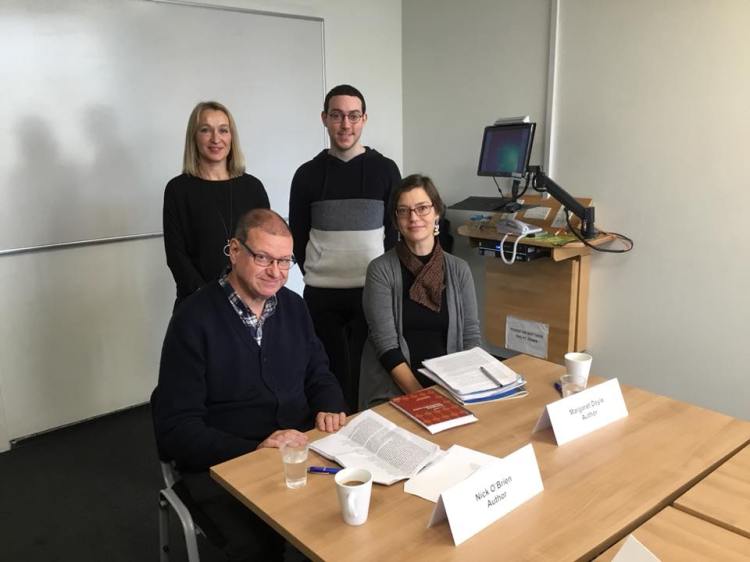 A shorter version of this blog has also been posted to the SeNSS doctoral training partnership website here.

On Wednesday the 23rd of October 2019, Essex Law School’s Public Law Cluster hosted the launch of Margaret Doyle and Nick O’Brien’s new book Reimagining Administrative Justice: Human Rights in Small Places. UKAJI had announced the publication of the book shortly before. Margaret Doyle is a research fellow at Essex Law School, a professional mediator focusing on SEND issues, and a frequent contributor to UKAJI. Nick O’Brien is a tribunal judge specialising in SEND and mental health casework, and the winner of the Crick Prize for Best Piece in Political Quarterly of 2018 for his article on Administrative Justice in the Wake of I, Daniel Blake. The launch was chaired by Professor Maurice Sunkin (@mauricesunkin) and included commentaries from panellists Lee Marsons (@LeeGTMarsons), a GTA and PhD candidate at Essex, and Liz Fisher-Frank (@lizfisherfrank), supervisor of the Essex Law Clinic and a former legal aid lawyer. It was attended by a packed room of researchers from across the Law School and Human Rights Centre.

In launching the book, Doyle explained that the title draws inspiration from Eleanor Roosevelt’s speech to the UN in 1958 entitled Where Do Human Rights Begin?, with the First Lady’s now famous answer being: ‘In small places, close to home’. By this, she meant that rights, ‘are the world of the individual person; the neighbourhood he lives in; the school or college she attends; the factory, farm, or office where she works.’ For Doyle and O’Brien, the purpose of the book is to tie this political and aspirational commitment to everyday rights or social rights to the legal world of administrative justice.

Instead, drawing on the social democratic political tradition and the design theory of Ezio Manzini, Doyle and O’Brien argue for what they call a demosprudential approach. For them, this would be based around the notions of community, network, and openness. They suggest that, given the procedural flexibility that exists in ombuds, public inquiries, mediation, and some tribunals in comparison to the ordinary courts, these institutions and instruments should take central place in achieving this demosprudential reimagining.

With a focus on community, Doyle and O’Brien seek to advance the case that, even though rights are classically held to belong to individuals, social rights especially are relational and networked – they operate in communities, groups, workplaces, and families, not in isolated people. In addition, an over-emphasis on individual complainants may render invisible the wider community benefits that can, do, and might emerge from different ways of resolving cases. Moreover, through concentrating on network and openness, Doyle and O’Brien wish to resist the contemporary temptation to make everything a system, to make everything ‘linear’ and ‘coherent’. For them, it is perfectly plausible and desirable for administrative justice to be iterative and organic – more like a weaving fabric than a closed, hard-bordered, rigid system – with different institutions and instruments (say, public inquiries and ombuds investigations) operating at different speeds in different ways at different times as information develops and context changes. For this reason, for the authors, a single, definitive end to a complaint at an arbitrary moment in time because of a legalistic desire for closure is to be resisted.

Following the authors’ summaries of the book, attention turned to commentaries from panellists Liz Fisher-Frank and Lee Marsons.

Fisher-Frank focused on the practitioners’ perspective. She noted that, in her work at Essex Law Clinic, she regularly saw how children could be caught in the middle of parental disputes in the courts, with little to no ability to independently defend their interests and project their own voice. For Fisher-Frank, this role of giving voice to otherwise voiceless children might be one that ombuds could take on and develop in a way that courts have found difficult. Fisher-Frank also applauded the book for connecting administrative justice to aspects of life that matter so significantly to most people – education, healthcare, welfare, employment, and the like. Fisher-Frank further commented that Doyle and O’Brien’s use of design theory was a creative way to rethink the structures of legal institutions so that they worked for the people and communities subjected to them.

Meanwhile, Marsons focused on the conceptual and theoretical underpinning of the book in an attempt to extend and deepen its analysis in future research. In particular, he focused on four themes:

The conceptualisation of ombuds-citizen relationships and in particular where the vulnerability lies in those relationships. Marsons suggested that, in much previous scholarly thinking, there can be an assumption that the relationship between ombuds caseworkers and complainants tends to be weighted against complainants, with the vulnerability and emotional exposure being carried largely by the complainant. However, drawing on vulnerability theorists, Martha Fineman and Jonathan Herring, Marsons argued that vulnerability could be perceived as an essentially universal concept that touches everyone but in different ways, at different times, for different reasons, at different intensities. This insight was critical in the context of ombuds where, given their caseload which continues to be a significant diet of healthcare issues (Tyndall, Mitchell and Gill, Value for Money Study p.10), there is increasing recognition of the vicarious trauma, secondary traumatic stress, and burnout suffered by caseworkers, leading for some time to attrition rates higher than the public sector average. To Marsons, this appreciation of the mutual vulnerabilities between and among complainants and ombuds caseworkers would strengthen and extend the relational underpinning that the book seeks to advance.

The place of psychological theory in promoting trusting relationships. The book relies on several implicitly psychological concepts, such as ‘trust’ and how it might be promoted in the ombuds sphere. For Marsons, one way that this idea might be given an ‘empirical bite’ is by drawing on biomedical research, where there is already a growing literature that seeks to understand how biomedical participant-researcher relationships, otherwise based on reliance and power differentials, can become more trusting, egalitarian commitments. In addition, Marsons wondered whether different strategies might be required to promote trust between different actors – what might promote trust between, say, complainants and individual caseworkers, might not necessarily promote trust between complainants and historically distrusted ombuds institutions or leaders more generally.

The role of rights in administrative justice and whether a rights-based framework may be in tension with developing therapeutic understandings of administrative justice. Doyle and O’Brien are critical of ‘legalistic’ and ‘jurisprudential’ conceptions of rights, that envisage them only as matters for law, courts, and judicial enforcement. They prefer to envision rights as broader social, cultural, and political commitments within society, not necessarily connected to legalism. For Marsons, this might be problematic because, as we know from the work of Sharon Gilad, a significant part of an ombud complaints-handler’s task is expectations management. That is, making clear to complainants what the ombud can and cannot do. The concern was that in using the language of rights in a way that may not reflect public understanding of rights as legal entities, this vocabulary may encourage expectations that ombuds are unable to fulfil.

In addition, Marsons noted that there is increasing research in the administrative justice sphere (e.g. Dysfunctional Accountability in Complaint Systems: The Effects of Complaints on Public Service Employees, by Chris Gill, Maria Sapouna, Carolyn Hirst and Jane Williams, [2019] Public Law 644-664) drawing on therapeutic jurisprudence as a guide to reform. This tradition can prefer to invoke broader ideals such as “psychological wellbeing” and “emotional wellness”, instead of focusing only on a rights vocabulary. For Marsons, while Doyle and O’Brien may seek to accomplish similar objectives to therapeutic perspectives, he wondered whether, because of this potential contrast in conceptual underpinning, there may be an unexposed and unexplored tension between rights-based reforms and therapeutic jurisprudence-inspired reforms. This was not something that had emerged in the literature yet, but may well be worth bearing in mind for the future.

A call for multi-disciplinarity

Ultimately, the event produced a rich, wide-ranging discussion of administrative justice, including its centrality in protecting the interests of the poorest and most vulnerable and its striking connection to many areas of social science, including political theory, psychology and psychoanalysis, relational and vulnerability theory, and even design theory. The book should encourage scholars to think of administrative justice ultimately as a multi-disciplinary research exercise, which cannot be properly understood, reformed, or reimagined only through a lawyer’s lens. In its reach, administrative justice touches most areas of importance in human life and has significant political, emotional, social, economic, psychological, and health consequences, among others. Scholarly thinking and research should reflect this complex, polycentric, multifaceted character.

UKAJI sincerely thanks Margaret Doyle and Nick O’Brien for their attendance at the launch, and wishes the book every success.

Funded by the Nuffield Foundation, we link research, practice & policy on administrative justice in the UK
View all posts by UK Administrative Justice Institute »
« Ten Years of the Administrative Court in Wales: Success or Failure?
UKAJI October 2019 round-up »