Seminar report: The changing world of social security and administrative justice in Scotland

On 18 October, Queen Margaret University and Glasgow University hosted, with UKAJI, a seminar to explore the challenges and opportunities arising from the Scottish Government’s new powers in relation to social security and to consider the wider implications for administrative justice in Scotland. The seminar was an opportunity to bring together representatives from the Scottish Government, the courts and tribunals, the legal and advice sectors, and academic researchers to discuss the landscape of devolved social security powers and responsibilities and the distinctly Scottish approach. Here we publish an overview of the seminar and links to the presentations.

Chris Gill (QMU) and Tom Mullen (University of Glasgow), both members of UKAJI, opened the seminar and set the scene with an overview of the work of the Scottish Tribunals and Administrative Justice Advisory Committee (STAJAC), court reform in Scotland and the devolution of tribunals.

Chris Gill presented new data from the Scottish Public Services Ombudsman (SPSO) on its remit to consider complaints on Scottish Welfare Fund, which is a national scheme administered by local authorities. Since April 2016 the SPSO has been the 2nd-tier reviewer of these complaints, taking over, following an interim period, from the Independent Review Service, which was abolished in 2013. A review of the interim arrangements carried out in 2014 identified reasons for the significant drop-off in 2nd-tier review requests, with complainants saying they were not provided with information on the review option or simply feeling too emotionally drained to persist with a review. The new model, which adopts much of the former Independent Review Service process, is innovative in introducing an appeal mechanism into an ombud framework. Could this be a model for future development of ombuds in administrative justice?

The new role in Welfare Fund complaints raises questions for the SPSO and also highlights opportunities to improve the use of learning from complaints and to strengthen the relationship between the ombud and Parliament. It also highlights the need for central complaints data and for the SPSO to be given own-initiative powers, as is the case (or is being considered) in Wales and Northern Ireland. 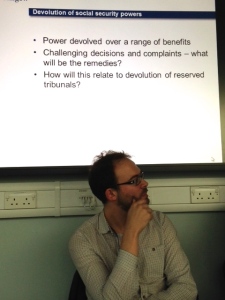 Chris Boyland, who leads on social security legislation for the Scottish Government, explored the challenges faced by the government in the transfer of administration of some benefits from the UK government, the subject of a current consultation. The devolved benefits represent only 15% of total social security benefit spend by the UK, but the benefits being devolved primarily involve disability and incapacity as well as carers, and Boyland noted that this means being acutely aware of the particular difficulties faced by recipients and operational issues in the administration. Furthermore, in many ways this represents a more complex challenge than devolving 100% of benefits. Appeals in Scotland of disability-related benefits have declined significantly – a fact explained by the Department for Work and Pensions as due to the introduction of Mandatory Reconsideration.

There is currently no Scottish infrastructure for administering benefits, so the Government is faced with the challenge of building that infrastructure, including establishing a social security agency. Such a challenge, however, also presents opportunities. The Scottish Government will be convening a disability benefits assessment commission and will be abolishing the ‘bedroom tax’. It will also be setting out a distinctively Scottish vision in which it expects people to be treated differently in Scotland that they are in the UK, and will be considering how to embed principles of dignity, respect and equality across the new system. How, for example, will decisions on benefits reflect the duty to consider the impact of the process on the dignity of the person receiving the benefit, and what result will embedding these principles in practice have on the result?

Early in the New Year the government will publish responses to the current consultation and will set out more detail of the proposed benefits infrastructure.

Anne Hastie of the Law Society of Scotland set out the Society’s key points in its response to the government consultation. Its Administrative Justice Sub-committee was established in 2014 to monitor and keep under review developments in admin justice. In relation to social security, the Sub-Committee has established key principles on mode of delivery of benefits assessments and charging for medical evidence, as well as the need for scrutiny of the system and the quality of decision-making. She noted that the need for independent oversight is recognised in civil justice. The Government’s establishment of a new agency is an opportunity to embed values and principles. 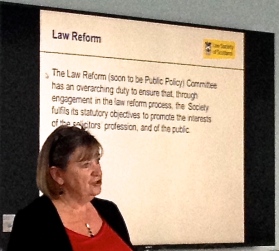 Citizens Advice Scotland has published a series of papers on the benefits system, including one on general overview of aspirations, ‘Fair, equal and responsive’. Mark Patterson spoke of CAS’s concerns about Mandatory Reconsideration and in particular problems with a lack of timescale for review decisions and delays, during which people are left in limbo with no access to funds. He noted that the concept of MR does have a legitimate aim and people are not against it in principle, but much needs to be improved. Among bureau advisers, 62% believe there should be some form of mandatory review if working properly. He also highlighted the value of information and advice in improving claims and thus preventing unnecessary appeals. Among the improvements CAS is seeking are clearer information, extension of the time to request a review, and automatic transfer to tribunal for appeal if a review is not decided within a statutory time limit. 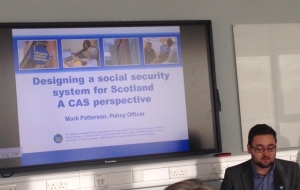 Among participants’ comments were a concern that the values embedded in the aims of the policy makers in Government would be ‘lost in translation’ as the courts and tribunals service takes over implementations. One participant noted the value of a face-to-face process in appellant success rates and asked how any internal review process could replicate that. Another question was whether there would be value in producing a code of practice for internal review processes used across government departments, and if so how would that work in the devolved and reserved areas of administrative decision-making, with such distinct priorities and values integral to each.