This is an ambitious book, funded by the Nuffield Foundation, which followed an ambitious conference held at Leicester University in 2015 which reviewed the substance and impact of ambitious EU legislation adopted in 2013.

In short, Professor Pablo Cortes and more than 20 contributors examine the content and background to the new EU framework for Consumer Alternative Dispute Resolution (CADR), outline how the requirements have so far been implemented in nine Member States and conclude with evaluation and speculation about current and future trends. The basic requirement is for EU Member States to ensure the provision and availability of ADR schemes that comply with minimum standards for resolving consumer / trader disputes. The conference and the book pre-date the Brexit decision, though as the editor notes in his Foreword, “I would not anticipate sudden changes in the field of consumer redress.”

The ambition of both the legislation and the book arises from the complexity and variety of both ‘demand’ and ‘supply’ which drive the concept of Consumer ADR. This is true within a single jurisdiction, let alone across and within the whole of the EU single market: differing sectors of trade; differing consumer and trader expectations and competences; differing legal cultures and civil justice systems; differing approaches towards self-regulation, statutory intervention, mandatory participation, binding effect and so on.

And of course – as a consequence – there exists a bewildering variety of current and emergent CADR models and techniques. CADR is in fact scarcely ‘alternative’. In almost every jurisdiction, it is rare for consumer disputes to be resolved through conventional courts. Apart from the still-dominant ‘Give Up’ (or ‘Exit’) option, the numerous CADR schemes are the new default avenue for consumers seeking redress. But with no single model, the main common features are that they are not the courts and (with varying degrees of success) they attach substantial weight to informality and accessibility.

The legislation seeks simultaneously to improve access to justice and build trust in the market by aiming to increase the availability and awareness of quality CADR entities. But the imperative of ensuring user-friendly schemes tailored to the needs of real consumers in a wide variety of situations, means that any sort of harmonised ‘One Size Fits All’ approach has been out of the question. But EU law-makers and implementing Member States have been no better than anyone else at resolving the fundamental tension between the simultaneous need for customisation and standardisation.

As is stated many times throughout the book, however, CADR is still largely in its infancy and it is soon to judge the impact of the legislation. There are positive indications that the topic of consumer redress has risen up political, commercial and legal agendas. The full accounts of how new and existing schemes are being shoe-horned into the legislative requirements provide excellent insights into best – and less good – practice which will inform future developments. There is much to ponder from the French use of Médiateurs, from the single Belmed portal in Belgium, from the German preference for efficient courts and legal protection insurance and from Spanish ADR schemes for public services. The British readership will find Richard Kirkham’s very full and balanced analysis of UK consumer Ombudsman schemes particularly useful.

But the book is not slow to signal some more negative messages. Despite the ambitious legislative scope, ‘lost opportunity’ is a phrase that appears in a number of chapters. The bureaucracy and confusion arising from a plethora of competent authorities and accreditation and redress schemes may actually reduce awareness and trust. There is a risk that ‘competing’ schemes (whether private-sector or not-for–profit) may lead to forum-shopping (by both traders and consumers), lower procedural and substantive quality and a race to the bottom. Voluntary participation by businesses – with exceptions in some sectors – may undermine confidence and spread uncertainty. And some (purists perhaps) express deeper worries about whether ADR schemes deliver real ‘justice’ or an ‘inferior’ form of resolution.

This last point perhaps illustrates one theme which requires fuller empirical and discursive treatment – What do consumers (and traders) actually want and need from a redress scheme? If anything is clear from recent history, it is that ‘bottom-up’ consumer representatives and enlightened business organisations have been rather better at advocating and designing the key features of ombuds and other CADR schemes than ‘top-down’ policy-makers. That contribution – and the importance of lay, consumer and business participation in ongoing governance – is perhaps overlooked, though Naomi Creutzfeldt’s chapter does very helpfully place CADR within the ‘Four Pillars of Consumer Protection’ – Advocacy, Advice, Information/ Education and Enforcement/Redress. And she has been able to include welcome empirical data about consumer expectations and satisfaction rates across three energy ombud schemes.

Although Parts I and II bring together a wealth of factual and analytical material, it is Part III – New Trends in CDR – which is many ways the most stimulating. Chris Gill and Jane Williams stress the need for more coherent principles and approaches to design issues, deprecating ‘a random mix of accident, imitation, adaptation, instinct and political compromise’. In similar vein, Christopher Hodges stresses (inter alia) the need to recognise the ‘regulatory’ function of consumer redress schemes in  improving market behaviour, not least in aggregating data to provide feedback to the market and to regulators. But he worries that this function (and others) may be diluted in the absence of more coordination and simplicity.

UKAJI and its followers may especially appreciate one observation from Prof. Cortes:

“The new regulatory CADR framework is taking a similar route to that experienced by administrative tribunals in the UK. These first emerged as part of internal governmental departments to deal informally with citizens’ complaints, but over time and regulation, they became independent, moving from the executive to the judicial branch.”

There is plenty of material in this book for anyone who wants ammunition to prevent the ‘judicalisation’ of either tribunals or CADR schemes. Both have been a reaction to the costs, formality, inaccessibility and delays of conventional courts. And perhaps there is also much for tribunals to learn about the benefits of ‘ombudsmanisation’. 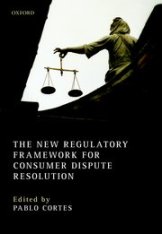 Richard Thomas CBE was Chair of the Administrative Justice and Tribunals Council, 2009-13. He was closely involved with the creation of the original Insurance and Banking Ombuds schemes and served as a founding Board Member of the Financial Ombudsman Service. Between 2002 and 2009 he was the UK Information Commissioner.

« Review of arrangements for disagreement resolution (SEND) – Part 2: Impact of compulsory mediation information on appeals to the First-tier Tribunal SEND
The 2017 election manifestos and the constitution »